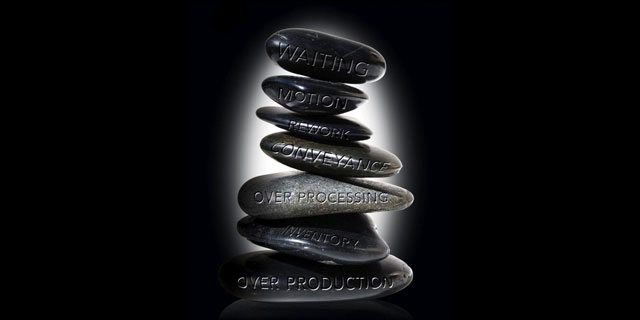 Harvard Business Review published part one of a three part series I wrote that builds on my October HBR piece (The Less-is-Best Approach to Innovation) which identified three subtractive trends in innovation: lean features, loose reins, and quiet minds. Here’s Part 1 reprinted, which HBR retitled from “7 Targets for Lean Innovation” to “It’s Time to Wage an All-Out War on Waste.” (Kinda like my original title better!)

In 1996, James P. Womack and Daniel T. Jones popularized the term “lean thinking”. It was their expression for what they observed studying Toyota’s manufacturing operations: an absence of waste. Today, lean concepts have moved beyond the factory floor to become an organizing set of principles and practices applicable to all business operations and activities, including entrepreneurial startups. Every idea in your company can benefit from a lean approach, be it a product, process, service, or strategy. But what does it really mean to be lean?

It’s often easier to describe what lean isn’t than what it is. Lean isn’t about being spartan, skinny or stingy. It isn’t about slash-and-burn cost cutting, reducing headcount or beating up suppliers to get the lowest price. Being lean means taking a subtractive approach and systematically removing anything impeding the free flow of value to the receiving party.

Lean innovation isn’t about doing more with less; it’s about doing better with less. I realize that’s a nuance, but think about it: You’ve undoubtedly said “no more” many times, even when it comes to something good. When was the last time you said, “Let’s not get any better”? Put simply, there is no limit on better.

To keep your innovation efforts lean, you have to wage an all-out war on waste. There are seven basic varieties:

Overproduction. Anything done without regard to whether the demand for it counts as overproduction. That includes something as simple as processing an order before it’s actually needed. Uber, a just-in-time limousine service that doesn’t take advance reservations, has successfully excised this waste.

Overprocessing. When there are too many non-value-added steps to achieve a given outcome, you’ve got overprocessing. Examples include too many operations to complete a phase of work, the effort needed to inspect and fix defects arising from poor tool or product design, and redundant data entry due to a lack of integration between multiple systems. Amazon, a lean company, banished overprocessing with the “1-Click” innovation.

Conveyance. The very best you can hope for when transporting goods, material, and information from one place to another is that nothing goes wrong. Conveyance is a necessary evil to be reduced wherever possible, and the U.S. Postal Service is in decline precisely because technology is helping us do just that.

Inventory. Any time inventory builds up, it creates unhelpful pressure to reduce or eliminate it. A visit to the average car dealership—an experience considered by many to be painful—is a case in point: it’s the buildup of cars that is the root cause of sales pressure and unfriendly consumer tactics.

Motion. While you might have the leanest process in the market, needless repetition of that process sucks time, productivity and cost. Even the mighty Amazon, with its enviable 1-click process, struggles with this: you cannot, for example, buy more than a single Kindle edition at a time. Last year, a large tech company wishing to buy five hundred copies of the ebook version of Guy Kawasaki’s bestselling Enchantment, tried Apple’s iTunes first. Apple told the company to buy five hundred gift cards, scratch off the back, and then enter individual gift codes one at a time into iTunes. At that point, the company gave up on Apple and tried Amazon. An employee of the company ended up making five hundred individual credit-card purchases. According to Kawasaki, “This fried my brain.”

Defects/Rework. Everyone has experienced a defect of some kind: errors, inaccurate or incomplete information, flawed products. It’s important to reduce the probability that things don’t work the way they should. Surprisingly, reducing defects is often not top-of-mind, even in life-critical experiences like medical care. A 2010 survey from t the Department of Health and Human Services found that about one in every seven Medicare patients in hospitals suffers a serious medical mistake, contributing to the deaths of an estimated 180,000 patients a year. Of those, roughly 80,000 were caused by errors that could be caught and prevented, with the simplest of methods—standardized checklists like those used by every airplane pilot—as surgeon/author Atul Gawande so rightly points out in his book The Checklist Manifesto.

Waiting. Tom Petty had it right: the waiting is the hardest part. Whether it’s an endless, unmoving queue, being stuck in idle while you wait for an approval to proceed, or simply a slow connection speed, we’ve all experienced waiting, and the accompanying sense of helplessness and lost productivity. Both MinuteClinic and WellnessMartMD have eliminated the bane of every healthcare patient’s existence: the dreaded waiting room. By minimizing procedures to those that are quick and easy to handle, waiting has been reduced to the point of not needing a room to do so.

Where is the excess and waste in your business, and what are you doing to eliminate it?

The Art of Adding By Taking Away (New York Times!)