Except…it’s not a bar. And it’s three economists, not one.

When three economists on a roadtrip to Maine after an academic conference in Boston wandered into a local shoe store looking to kill some time, little did they know it would spark a nationwide trek in search of Main Street business lessons that big and small business alike might learn.

Michael Mazzeo, Paul Oyer and Scott Schaefer were so intrigued by the unusually pushy sales staff that they engaged the owner and staff in a long conversation about the merits of the store’s secret shopper program. The conversation inspired the trio to hop in a car, escape the ivory towers of b-school, and head out on a road trip through America’s heartland on a quest to answer a single question: What can big businesses on Wall Street learn from small businesses on Main Street?

Instead of teaching the tried-and-true case studies from the likes of GE and Microsoft, what if they could instead uncover from back road businesses a more tangible way to learn about everything from pricing to brand management to team building?

Why study Sports Authority when you can learn from Mike Bodart, the sporting goods king of Columbus, Indiana? Or why not learn about scaling a business from Dr. Burris, the flying orthodontist who operates multiple, profitable practices in rural Arkansas?

The story of their journey is told in ROADSIDE MBA: Backroad Lessons for Entrepreneurs, Executives and Small Business Owners, a sort of Keynes-meets-Kerouac book packed with authentic insights from small businesses from Alabama to Idaho that every executive or entrepreneur can learn from. At every strip mall and mountainside pit-stop, the authors apply classic economic reasoning to the strategic questions these small town small businesses – and all businesses – struggle with. 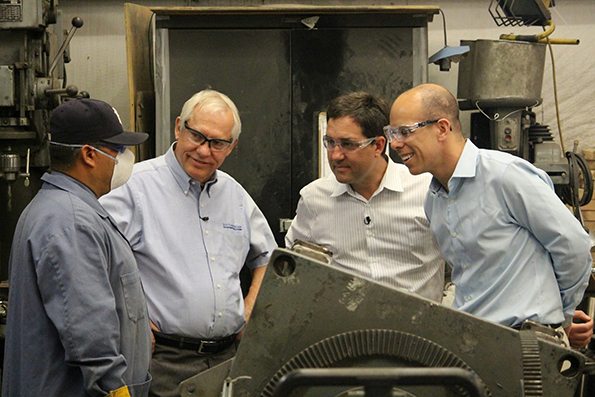 I asked each of the others the same question: what is your personal favorite lesson or example with respect to what are arguably the most pressing challenges facing small business owners today: scaling a business, product differentiation, setting prices, negotiating effectively, and incentives for employees.

On Scaling a Business

Scott: We heard a great growth story during our visit to Mugshots Grill and Bar, which started in 2004 with a single location in Hattiesburg, Mississippi. Owner Ron Savelle now operates three locations across Mississippi and even one in Baton Rouge, Louisiana. The geographic spread means Ron needs to find ways to monitor operations remotely, and he does so with clever uses of technology, including microchipped beer taps that send data straight to Ron’s phone.

Paul: I talk to students about lots of businesses where I say, “That won’t scale” and I probably would have said that about orthodontics. But Braces by Burris in Jonesboro, Arkansas shows there are scale economies to be had in orthodontics if you look at it right. They have a number of good examples of this including the fact that they made infrastructure investments so that they could quickly and profitably handle Medicaid claims. This allowed them to increase their business substantially and better amortize their other investments in equipment and the like.

Mike: Even a business with profound economies of scale won’t be successful if there isn’t enough demand to justify the initial investment. Steele Rubber Products, Inc. of Hickory, North Carolina manufactures replacement rubber parts for classic automobiles – it is a scalable business because once a mold is made for a particular part, it is relatively inexpensive to produce the actual rubber parts for sale. Deciding whether to make molds for a specific classic make/model involves carefully estimating future demand for collecting that type of car. The company recently added the Ford Pinto to its catalog, a surprise to us given its reputation as a lemon but sensible given the large number initially sold and the recent emergence of Pinto collectors clubs.

Scott: As we trekked last month through California’s Central Valley, we visited with Rosa Brothers Milk Company in Tulare. Milk is a commodity, but the brothers (Noel and Rolland) are trying to break free by differentiating on quality. They’ve built a milk processing plant and are selling milk (in glass bottles) and premium ice cream from Bakersfield to Fresno. Building a brand, securing distribution, and managing a plant present new challenges for the brothers — very different from those of managing a herd of dairy cows.

Paul: I’m going to use an example based on a company I visited with a small group of students near Stanford. We went to the Palo Alto branch of Fraiche, a small frozen yogurt chain. Frozen yogurt is everywhere now and competition is fierce. Fraiche has focused on the high-end, organic segment, leaving the lower end to Yogurtland and similar outlets. There is not room for many such stores in the area and, as a result, Fraiche can gain a loyal and sizeable market in a segment that is not the most price-sensitive.

Mike: Diana Geddes is the affable owner of FitTime for Women in Frankfurt, Kentucky. Diana carefully tailors the services offered at her gym to the target demographic – there are lots of fitness classes, free child care, etc. But, as importantly, Diana has carefully chosen not to invest and incur costs in things her customers don’t value. While competing gyms have purchased the latest new fitness equipment, Fit Time has continued to use older models because according to her ladies, “a treadmill is a treadmill.” 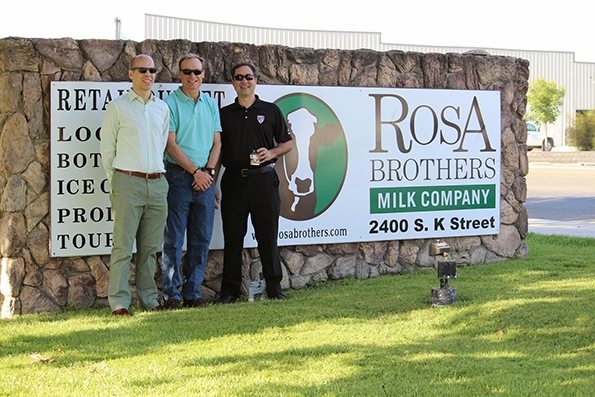 Scott: One of my very favorite visits was to Arnold Tool and Die in Council Bluffs, Iowa, a machine shop that specializes in custom work. To price jobs, owner Jim Hackett needs to somehow anticipate his own costs to make a part he’s never built before and then also anticipate the value he’ll be creating for his customer. Pricing is more art than science in cases like this, and Jim’s 40 years of pricing experience create a barrier to entry that’s tough for less-experienced shops to overcome.

Paul: When in doubt, talk about dogs! We visited Dogma Dog Care in the suburbs of Atlanta where the owner, Robin Crawford, had learned how to attract the price-sensitive dog owners while not giving too much away to those for whom Dogma is particularly convenient (so they are willing to pay a bit more.) She used coupons and targeted advertising to help bring in customers and keep the bottom line healthy.

Mike: It’s often difficult for a business to discount its products; in retail, for example, manufacturers may have minimum advertised price (MAP) policies that essentially prevent sales. Rosi Johnson, the president of Mississippi Music in Hattiesburg, described a creative solution to this challenge. While she can’t offer a price break to parents purchasing an instrument to play in the school band, she offers services like repair/replacement contracts and financing as a bundle. This expands her strategic options because the instrument is more attractive to purchase along with the additional services.

Scott: Paul Dennis, President and CEO of Gaylord Chemical in Slidell, Louisiana, faced one of the toughest negotiating challenges we saw. The company manufactures a solvent that has a variety of applications. To do this they need a steady source of sulfur, a corrosive element that is notably hard on industrial equipment. Gaylord built a plant next to an oil refinery in Alabama, and now the two entities find themselves mutually dependent. Gaylord needs the refiner for sulfur and the refiner needs Gaylord to get rid of its sulfur. Nailing down partnership details in an up-front, long-term contract enables Paul to spend his time on the core business rather than haggling with his partner.

Paul: It was not the best smelling place we visited, but the lessons in negotiation were rich at Eko Compost in Missoula, Montana. It’s a great example of the importance of knowing your own next best option, as well as that of the party you are negotiating with. Eko Compost gets its primary input from a sewage treatment plant next door. Knowing that the plant next door would find it very expensive to get rid of the waste any other way helps Eko Compost be aggressive in negotiations.

Mike: You’re in a better position in a negotiation if you have better information. Panhandle Converter Recycling in Dothan, Alabama made gathering information about the value of precious metals present in junked catalytic converters a cornerstone of its strategy. Uncertainty about the value would lead to bad price offers to junk dealers, but if Panhandle has a good idea what’s inside before it makes a deal it can avoid overpaying. Lyle Peluso, Jr. gave us a great tour of the recycling facility but wouldn’t share his spreadsheets – the company’s key competitive advantage.

On Incentives for Employees

Scott: Financial incentives tied to performance can be a double-edged sword, and we saw a great example of this in Saint Joseph, Missouri. JR Cheek owns JR’s TBA (which stands for tires, brakes and alignment). JR told us he wants his technicians to do a thorough examination of customers’ cars — in part to identify needed repairs that customers might not be aware of. To motivate this additional effort, JR experimented with tying the pay of technicians to their success at identifying these repairs, but found that this caused techs to do a hard sell, which turned customers off. JR now monitors and encourages this activity, but doesn’t factor it directly into pay.

Paul: Throwing money at a problem does not always fix it. Employees respond to incentives but, if you ask them to do something they can’t do real well, incentives won’t work. We saw that at Lewis, Hooper, and Dick, an accounting firm in Garden City, Kansas. They wanted to grow and build more of a sales-oriented culture so they started paying a bonus to people who brought in new clients. It helped but not a lot – you can’t change a culture quickly with money.

Mike: Giving your employees monetary incentives to perform better can enhance your productivity, but it’s important to make sure the rewards are tied to activities that the workers actually control with their effort. Rudy Klein of Klein’s DKI in Coeur d’Alene, Idaho had two types of employees in his disaster cleanup business: sales people that called on insurance companies and estimators who proposed a price based on how much the cleanup would cost. Since jobs were only profitable if the costs were estimated well, offering a bonus to estimators tied to profits made sense. But such a bonus plan would be problematic for the sales people; since they only had an impact on the revenue side of the ledger.

I asked a final question: what’s the one thing you want readers to take away from this book?

Mike: The idea that the answer to any question of business strategy is, “It depends”. All industries and companies are different and their strategies have to reflect that. There’s no “right” answer that applies to strategic issues across companies. The successful companies are those that figure out what is appropriate given the markets they face and their own capabilities.

Scott: Most business books won’t accept this reality – they claim to have a secret formula or that your company will be a success if you just follow what other successful companies have done. We believe that kind of advice is shallow and potentially dangerous.

Paul: And, most importantly… visit the South in the Winter, visit the North in the Summer, and don’t take Scott to any hotels that have any character.

Promote Yourself, A New Book By Dan Schawbel

If You Want To Disturb The Status Quo…