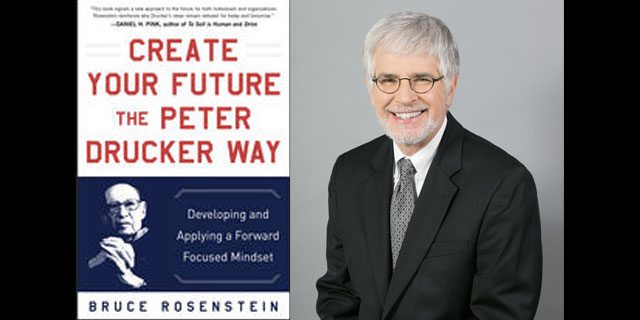 My friend and colleague (and Laws of Subtraction contributor) Bruce Rosenstein is a prolific writer and editor. He’s Managing Editor of Leader to Leader, author of the wonderful Living in More Than One World: How Peter Drucker’s Wisdom Can Inspire and Transform Your Life and wrote for USA TODAY for over two decades, from 1987-2008.

Bruce knows more about the most acclaimed management thinker of all time: the late Peter Drucker. He spent many hours with the man, and is both a student and scholar of “the Drucker way.” I’ve read everything Drucker ever wrote, and if there’s one thing I took from his collected works, it’s that he was always ahead of his time. He was on Main Street long before the parade arrived. I would challenge anyone to point to a business or management idea that can’t be traced to Drucker within a few degrees of separation.

But Drucker wasn’t easy to read. And his thoughts weren’t always easy to apply. That’s where Bruce comes in, because he does just that in his new book just out by McGraw-Hill, entitled: Create Your Future the Peter Drucker Way.

How do you define a “future-focused mindset” beyond what the term obviously implies…thinking about the future?

Thinking about the future is one component, but not the only one. The idea is to keep the future in mind as you go about your life and work, and factor it into your decisions and choices. So it’s not necessarily thinking about specific things that may or may happen in the future. When your mindset is future-focused, you recognize the necessity of managing your present reality and working toward building a better tomorrow for you and others.

We are notoriously bad about predicting the future…even about how we will feel about a specific event in the future. Why bother with the guesswork?

I agree. We should not guess about the future, and predictions are often faulty. That is why, in the book, I don’t advocate either predicting the future, or guessing about it. But figuring out where the world is heading, based on new knowledge, trends and events that have already happened but where we have not yet seen the full effects, in areas of life and work that potentially have an impact on us, can be quite beneficial.

Can you explain what you mean by “becoming your own successor?” I get the concept of legacy by a portfolio of work, but I’m struggling with self-successorship.

This is an idea of mine that was inspired by Drucker, but it is not his concept. Because I believe that, in the years following his 2005 death at 95, there has been so much additional scholarship about Drucker’s work, in addition to posthumously published material by him, we understand his work in a different, improved and more nuanced way. That makes him, in my estimation, his own successor as the top management guru.

I decided to broaden the concept to have people think of themselves as their own successor. Obviously, this is somewhat metaphorical and it’s hard to read it literally. Here are some possible ways of considering it: athletes breaking their own records; getting a promotion within your own organization, requiring you to think of yourself and your abilities in new ways; staying in your current job but redefining/reinventing it; or leaving your job and taking on something new and challenging in a different realm, also requiring new ways of thinking and acting.

You mention the role of spirituality and religion in creating one’s future. What’s the Drucker perspective on those issues?

Drucker was not particularly overt in a public sense about his specific religious or spiritual beliefs and actions. All indications are that he was privately religious. And there is considerable religious imagery and many references to religion and the Bible in his writing. There have been several scholarly articles published after his death about Drucker and religion. A classic part of his writing about faith, and the need for believing in something beyond the tangible and beyond oneself, is in the essay “The Unfashionable Kierkegaard,” published in 1949 and anthologized in at least two books.

I’m not a theologian or an expert on religion and spirituality, but these subjects hold considerable interest for me, and their intersection with Drucker’s writing was something I felt was perfect to include in the final chapter of the book, “Build Your Future Beyond Your Current Workplace.”

You were fortunate to have spent time with Peter Drucker. In what if any ways did Drucker the man differ from Drucker the management thinker? What was the most personally impactful moment for you?

Drucker the person and Drucker the management thinker were intertwined in a holistic way. Being a management thinker (as well as a thinker about other disciplines), was an inseparable part of his overall being. However, if some readers feel that his writing can at times seem stern, in person I found him to be quite warm, generous, gracious and at times humorous. I was impressed that he answered his own phone, and made his own arrangements for my interviews with him. And as we set up right before the cameras started rolling for an interview on video in 2005, seven months to the day before he died, he put me at ease by saying that during the interview, we should just refer to each other as “Peter and Bruce.”

By most psychological accounts, the Western world is nearly all doers, not thinkers. Drucker was in that small percentage (by some estimates less than 3%) of thinkers. What then do you believe to be the most relevant components of his thinking for a doer world?

My sense of this is that there has to be a lot in common between thinking and doing, and that the former is a necessity for much of the latter, beyond the instinctive. This gets back to his idea of the knowledge worker, a term Drucker coined in the late 1950s. If we are indeed in a doer world, whatever people do should be adequately thought out. A considerable amount of knowledge work may be going on behind the scenes. And though Drucker was a model thinker, he also did and accomplished a lot: regularly writing books and articles, teaching at a school named after him, and consulting for companies, nonprofits, arts institutions and governments. And that was just for his work-related activities.

What has been the most impactful personal or professional practice you have developed or adopted based on a Drucker mindset?

It is tough to choose. But in this case I will cite his idea of ‘living in more than one world,’ a phrase he used in that 2005 interview with me referenced above, and which became the title of my first book. It’s the idea that you have a number of things going on in your life, personally and professionally, for many reasons: meeting and interacting with different people in your different worlds; seeing where these worlds intersect; providing a buffer against setbacks, particularly at work ; and giving you experience and growth opportunities in areas where they may be unavailable elsewhere in your life.

What’s the one thing you want people to take away from this book?

I’d like people  to consider that despite ambiguity, uncertainty and risk, they should still consider the future to be something they can create in the present moment, by their moment to moment, day to day actions, thoughts, commitments and decisions. That if you approach the future in a reasonably systematic, organized way, you can successfully become, as Drucker put it, “organized for change.”