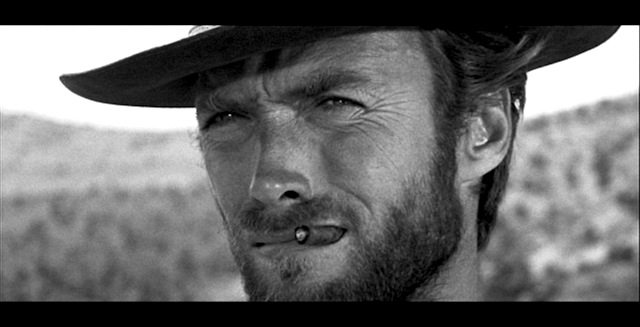 A few weeks ago, MGM ran the “man with no name” Western trilogy in hi-def. You know the ones: Clint Eastwood as the drifter gunman in black jeans and green pancho, a man of few words but never without a cigar. Starting with “A Fistful of Dollars” in 1964, followed by “For a Few Dollars More” in 1965, and “The Good, the Bad and the Ugly” with the famous whistle theme in 1967. These were the wonderfully gritty “spaghetti Westerns,” shot in Spain and directed by Sergio Leone…the sound was always recorded post-shoot on a soundstage, and always just a little off. (I don’t why, but it’s only in these three movies that off-sync sound doesn’t bug me…probably because I’ve watched them so many times I know what to expect, and it’s become part of the charm and tradition.)

At the end of the “The Good, the Bad and the Ugly,” MGM did a great little profile piece on Clint Eastwood, called “Craft.” It struck me that Clint Eastwood, in defining his trademark character, nicely merged the message in my last Artistry at Work post on authenticity and audience (and the possible tension and conflict between the two), with the third law of subtraction (Limiting information engages the imagination).

In the mid 60s, Clint was starring in the TV series “Rawhide,” and his contract prevented him from making movies in the U.S. So he traveled to Spain to shoot Westerns with director Sergio Leone. Leone gave Clint a free hand to create an unusual character. Clint took a unique approach to his rogue character, moving to the polar extreme of the U.S. “clean-cut” gunfighter stereotype. He chose his own wardrobe, shopping in Hollywood costume and thrift stores to find the trademark worn black jeans and green Navajo pancho. He eschewed the Stetson, opting for smaller, more circular hat brims. He selected cigars from an L.A. shop…thin, cheroot-style, hand rolled smokes called “Virginians,” and cut them to various sizes to maintain continuity in scenes. The cigars were strong and bitter and in his words put him in “a foul mood,” which helped him maintain the consistency of his rough-edged squint.

“He adopted a laconic attitude that fit this jaded gunfighter. And in an unusual move, convinced Leone to cut many of his lines. This allowed him to simply listen and react, which was critical, because in Eastwood’s words, he didn’t want the dialogue to dissipate the power of the character. The result of these minimalist choices was a potent performance, and a character that launched not only an enduring trilogy, but redefined the entire Western genre.”

The impact on this audience member is undeniable.  I always marvel at the character. I never cease wanting to know more about the backstory of the “man with no name,” and I always fill in the blanks in new ways. That’s most likely why I never tire of seeing these old flicks…there’s enough missing that I can inject new imaginary details into the character so the story never gets stale. And of course, what guy doesn’t project themselves into the movie to be the strong, silent, macho man with mad skills?

Thanks to Clint for blending artistry at work with the laws of subtraction.

Tags: Clint Eastwood, MGM, Sergio Leone, The Good the Bad and the Ugly

The Most Important Choice

The Art Elements of Work