It’s been well over a decade since Dan Pink predicted that the macro trend of automation would change the nature of just about everything in his bestselling book A Whole New Mind. The context of his message revolved around work, with the central idea being to take a look at what you do, determine whether part or all of it could be done better by an algorithmic approach, and reposition your skills accordingly. Even traditionally specialized professions, like law and accounting, were at risk.

I doubt Dan had any inkling of just how automated the world would become. He could not have put his finger on the the eventual impact of automation: the overwhelming and insatiable desire for immediacy.

Welcome to the new age of immediacy, where if you cannot get me exactly what I want at a competitive price and do so instantaneously, I’m not only surfing on to the next offer, but I likely won’t revisit you. (I doubt whether Dan was predicting this end of loyalty as we know it.) 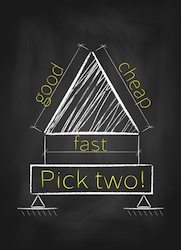 In the age of immediacy, the old idea of the Iron Triangle–you know, that given quality, cost and speed you can have two, but not all three–is simply irrelevant. In fact, it’s been dead for quite a while for any entity that we’d properly label disruptively innovative…point to any product, service, or company you think of as a true groundbreaker, and tell me that haven’t put a nail in the coffin of the Iron Triangle.

In the age of immediacy, quality and cost are ante to the game, and time compression is the key to success. We’ve lost the ability to wait, and it’s probably a good thing, at least in the business sense.

Waiting is a form of waste, and next to quality defects (which have been largely lean/six-sigma’d away) is the most aggravating. It’s always been that way, to a certain degree, but the rise of automation and the age of immediacy makes it ever so much more apparent. It’s ever so much more annoying when now than in the past when we’re made to wait.

We get the spinning wheel on a website, and we’re all “buh-by!” We get the message “please wait while your video buffers,” and we’ll find something else to watch. We pump gas and wonder why this particular gas station is so behind the times that they don’t have a video screen to entertain us and take our mind off the fact that this pump is slower than the one gallon per second I really want.

The smart people are capitalizing on the desire for immediacy, and focusing their strategy on time compression. They are even going one better: eliminating the need for us to think ahead. The whole premise of shared services like Uber and Taxi Magic is that we shouldn’t need to make a reservation in advance, we should be able to get a limo on demand.

Amazon and Walmart are right there with Google, with Amazon promising not just same-day, but also Sunday delivery in selected cities.

Savvy advertisers like the industry-leading car shopping site Edmunds.com are using programmatic advertising to target ads for specific shoppers. Here’s how it works, with a huge thanks to Edmunds.com for sharing all this with me in terms I can understand:

You (along with your all browsing behavior) enter, say, “Edmunds” in your web browser, and the Edmunds.com homepage opens up with three ads, called “impressions. Two of them were pre-sold to the advertisers by Edmunds, so they’re queued up and ready to be served when you or someone just like you visits Edmunds.com.

The third spot, though, is currently unsold. Typically a site like Edmunds would throw up a “house ad” for the third spot. But because the Edmunds ad server has enabled programmatic, in the split second before your browser attempts to render that third spot, it makes a real-time call to an advertising exchange API (application programming interface) instead.

Then, the ad exchange puts out a light-speed “request for bids” to all marketers who have “seats” on the exchange. The request essentially says “I’ve got one impression coming from some anonymous person, from some anonymous website, but the website looks like it’s a premier publisher, is probably an automotive website, the visitor is 80% likely to be a woman, lives in the greater Los Angeles area, makes over $150k per year and is in market to buy a toaster, soap, and a lawn mower in the next month. Oh, and this particular website will not accept bids under $5 and not take bids if you want to advertise Viagra, any controlled substance or a video game.”

Instantaneously, thousands of advertisers respond to the bid request with bids starting at $5. Now, suppose that the highest qualified bid comes from an agency representing Starwood Hotels, who, 4 days prior, had used their computer system’s trading desk to predefine a rule saying, “buy up to $525k worth of impressions between now and next Sunday targeting women making more than $80k that are on a premier publisher’s website.” In the next millisecond, the ad exchange notifies Starwood Hotel’s agency that they’ve won the impression, and to please furnish the source code for the ad immediately. Within the next few milliseconds, the source code for that particular ad content makes its way back to your browser where it’s rendered in the third ad slot on the Edmunds.com page you originally requested.

That puts advertising on a scale of automation not even Dan Pink could have imagined. In fact, AMC’s Mad Men season 7, entitled “The Beginning,” might have been more appropriately called “the end”–of conventional advertising: you know, agency driven, charismatic account executives wooing clients for months and the creative department agonizing for weeks over ideas to win the mind of the consumer.

Heck, even the hilarious HBO comedy hit Silicon Valley centers on a startup with a killer compression algorithm!

What compression algorithm are you working on?