I love stories like this one, mostly because of my bias toward the disciplined pursuit of less as the pathway to something better. It’s the story of Brian Lam, told by David Carr, who writes the Media Equation column for the Monday Business section of the New York Times, which is where I read it.

The arc of the story in a nutshell. Act I: Brian interns at Wired, becomes editor of Gizmodo, and takes the blog from 13 to 180 million pageviews in 5 years. Act II: Brian burns out at age 34, coming to hate the neverending chase for posts and page views, feeling like he was living like a robot, and quitting Gizmodo. Act III: Relaunches a gadget site, with a distinct difference, called The Wirecutter, and spends more time surfing. 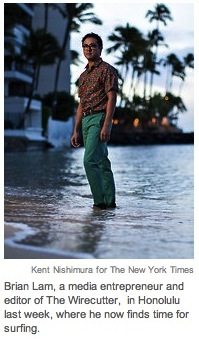 Instead of trying to cover everything, Brian becomes a curator, a distiller, a trusted expert…of one, and only one, item in each category. As Carr writes: “Mr. Lam and his staff of freelancers decided to rely on deep examinations of specific product categories. Using expert opinions, aggregated reviews and personal research, they recommend a single product in each category. There are no complicated rankings or deep analytics on the entire category. If you want new earphones or a robot vacuum, The Wirecutter will recommend The One and leave it at that.”

At the heart of the subtractive new site is Brian’s deep desire to provide  “evergreen content that didn’t have to be updated constantly in order to hunt traffic. I wanted to publish things that were useful.”

What isn’t there? Clutter. Distraction. Complication. Indecipherable rankings and evaluations which are mostly meaningless and anything but helpful. Brian is not delivering everything there is to know, only what you you need to know.

And, he isn’t chasing ads. Most of The Wirecutter’s revenue comes from affiliate fees (read, Amazon). That’s a good move, since ad rates “continue to tumble.” And, as the article states,“Brian’s insight is that in a world of loudest and fastest, he has turned it down, doing it slow and doing it right. And by being consumer facing, he doesn’t have to have monster numbers. The people come ready to buy.”

EPILOGUE. “Mr. Lam’s revenue is low, about $50,000 a month, but it’s doubling every quarter, enough to pay his freelancers, invest in the site and keep him in surfboards. And now he actually has time to ride them. In that sense, Mr. Lam is living out that initial dream of the Web: working from home, working with friends, making something that saves others time and money.”

You can read the full story HERE.