Whenever I travel to speaking engagements or strategy/innovation sessions, I try to connect with people with whom I’ve had some sort of idea exchange. Last week I traveled to Montreal to keynote at a large quality conference, and my schedule permitted me the time to meet up with Tanveer Naseer, coauthor of a unique leadership book, called Leadership Vertigo: Why Even the Best Leaders Go Off Course and How They Can Get Back On Track. 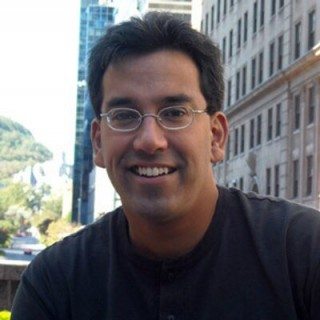 Tanveer interviewed me a while back for his popular podcast Leadership Biz Cafe, and I wanted to return the favor. He graciously gave me a quick walking tour of Old Montreal, and gave me my opening line (in French, of course) for my talk.

We chatted about his new book in a great little coffee shop.

Why does the world need another leadership book?

The important thing about this one is that it addresses a common problem we’ve seen in many organizations, where the leaders have to count on their employees more than ever before, and who are so pressed for time and stretched for resources, that the challenge becomes ‘how do we apply all the insights, all the experiences, all the information we get from big data in a fashion that really addresses the needs of the organization?”

That most challenging issue is what I call leadership vertigo, where how a leader wants their leadership to be perceived is fundamentally different from what employees are actually experiencing. We have so much information out there about leadership, so many studies about what we should be doing, but if we look at the disturbing levels of employee disengagement, we see this big gap being at the center of it all.

How’d you come up with the term “vertigo”? You’re not saying leaders are dizzy and spinning out of control are you?

It’s funny…when we hear “vertigo” almost everyone calls up the famous scene from the movie starring Jimmy Stewart. Actually, vertigo is where you’re seeing or hearing a certain reality but your brain is convincing you of something else. We see this in aviation–John F. Kennedy Jr. experienced it in his fatal crash–where the instrument panel is telling the pilot something’s wrong, the plane’s upside down, for example, but the pilot’s brain is saying everything is ok, the plane can’t possibly be upside down, and that the gauges are wrong.

So what’s the root cause of that condition?

As leaders we are just so busy trying to get things done that we lose perspective on how all these various measures connect to a larger picture. The principles we arrived at — building community, developing competency, earning credibility, and cultivating compassion — act as guideposts in helping leaders reflect on whether their words, their measures, their actions are truly helping create the conditions that help the organization succeed.

Why does “build community” come first?

It’s important to start with the big picture, the wide angel view, the one that encompasses everyone, before looking at oneself. “Building community” focuses on getting clear about the reality facing employees in an organization, getting past our own perceptions as leaders, and understanding what’s really going on.

There’s a great story of Walt Disney asking an 18-year old ride operator what he would do to improve the ride, and the operator telling Walt — already a legend and icon at this time — that there wasn’t enough head room in the gondola carts…people kept hitting their heads. No one had addressed the problem in any real way until Walt did his walkaround that day and decided to check in with the youth. The reason the young man felt safe to tell the great Walt Disney about a problem that had existed for years was that Walt had created a true community among his Disneyland employees, and they believed their thoughts and ideas were critical to success.

Your second principle, that of developing competency, sounds more like coaching than leading. Are you redefining competency?

Yes, in a way. We’re not just talking about technical skill development, but rather how a leader interacts with employees in those micro moments and brief encounters, like the one I just mentioned with Disney. Those small interactions inform and impact results, because people takes cues from the energy, emotions, and attitudes the leader demonstrates.

There’s a lot being written about the relationship between productivity and energy levels–you’ve written about this, and the need to take breaks. Leaders must recognize the ebbs and flows of energy, and if taking a break isn’t possible, they must be mindful of the energy and emotional state they’re in, and ensure that it doesn’t send the wrong signal. A meeting held at the end of the day, for example, when everyone is exhausted, requires special care, especially if no one’s been able to take a break that day.

It’s more about living up to the message you’re sending, in the context of your attitude and energy levels.

How does one “earn credibility,” which is your third principle?

Through listening and awareness. Leadership is about influence, and you can’t have influence unless people are willing to follow you. And just because you have a title, doesn’t mean people will follow you. To be effective you need that credibility, which comes not from telling people what to do, but from demonstrating that you’re interested in the reality your people face, and taking action reflective of that reality. It requires self-knowledge, self-awareness, and honest answers to questions like “what’s it like to work with and for me?” and “do people believe in me?”

As your employee, how would I know you’re listening to me?

Well, that ties into the fourth principle, cultivating compassion. We hear about emotional intelligence a lot these days. Typically what’s talked about is empathy. The important thing to recognize is that we are hardwired for empathy: look at any natural disaster in the world, and we all react to it in a visceral way. The recent ice bucket challenge is a great example–so many people participated to draw attention to a disease so few of us will ever have to address in our own lives, yet we were all impacted by it.

But we’re also hardwired for curiosity. So for me, compassion is about pairing that sense empathy with our natural tendency to be curious, so that we want to actively learn and understand what those around us and that work for us are experiencing under our leadership.

Tap into that compassion, and you’re better able to listen attentively, and then do something about what you hear.

What’s the one thing you want readers to take away from Leadership Vertigo?

It’s that as individuals, as leaders, we are all going to make mistakes. We’re not always going to get it right. But that’s ok, because in those moments where what we’re seeing and what others are experiencing aren’t aligned, if we are willing to learn from that gap, we will be much better off going forward.

I’m hoping people will understand leadership is fluid. You’ll have moments when you shine, and others when you won’t. As long as you’re open to that, and understand these are learning moments, you’ll continue to succeed, helping your organization and employees.