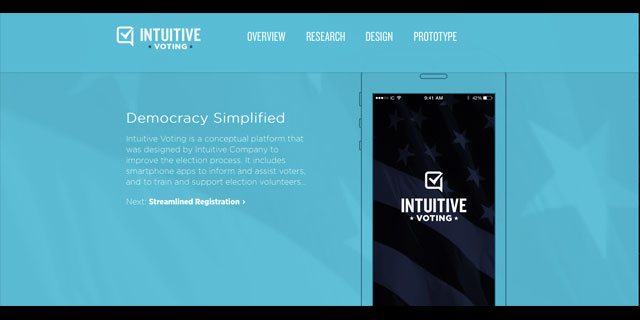 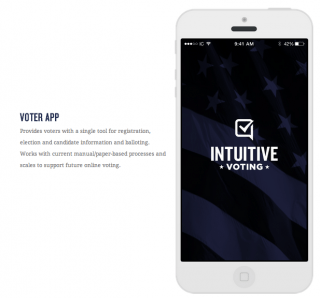 “Intuitive Voting,” submitted by Intuitive Company’s team leader Rob Tannen, consists of two smartphone apps, one designed to inform and assist voters, the other to train and support election volunteers.

For those of us who suffered through last week’s old-school, painful voting process, this comes a week too late. There’s always 2016, I guess.

Still, I think the app is worthy of the win. Take a look at the prototype HERE. (Best viewed with Chrome or Firefox.)

“We wanted our solution to be both forward-thinking and backward-compatible,” said Tannen. “While we envision online voting via the app, the near-term value is in enabling citizens to learn about candidates and issues before Election Day. People can even select choices ahead of time and bring the app into the voting booth to be more effective and efficient voters.”

The voter app works within the current election infrastructure to keep citizens informed by setting reminders, providing ballot choices that can be used for reference at the polling station, and, in the long term, supporting online voting. The volunteer app for training and supporting election workers includes such resources as video guides for setting up voting equipment and a feature to report estimated poll waiting times to election officials and voters.

Take a look at the team’s design process…it’s textbook design thinking, from research to design and prototyping.

How To Cross The Tech Chasm