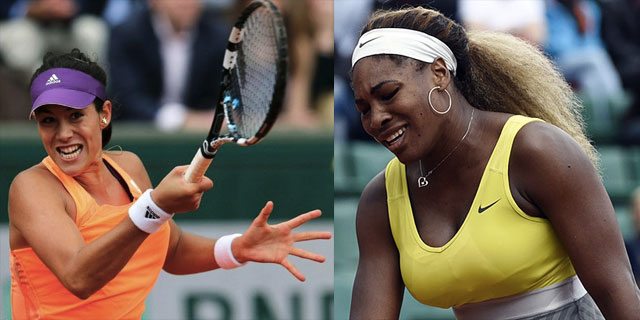 The more I work with teams to facilitate strategy development using the Roger Martin/A.G. Lafley 5-question cascade, the more I find myself engaging in the mental exercise of deconstructing noteworthy public wins, especially of the disruptive kind.

As an avid tennis player and fan, I find the Martin/Lafley construct especially useful. (Note: Roger Martin is as well a tennis player, and the president of the Canadian Tennis Association, so maybe this isn’t so surprising or accidental.) For example, it was quite clear to me that Stan Wawrinka’s upset of world number one Rafa Nadal in the Australian Open final came from a sound winning strategy, and I was able to fit what I observed pretty easily into the Martin/Lafley framework.

Yesterday, I watched 35th-ranked, 20-year young Garbine Muguruza absolutely annihilate world number one and top-seeded Serena Williams at the French Open, handing Williams her worst defeat ever in a Grand Slam event: 6-2, 6-2. It was definitive. It made the players’ respective ranking appear to be reversed. And it was as David vs. Goliath as you can get.

So, as has become a rather enjoyable mental gymnastic, I deconstructed the victory using the 5-question framework, then did a bit of reverse engineering of the “what must be true?” variety, because that’s the prompt for mid-match adjustments (of which there weren’t really any).

The backstory on Garbine Muguruza is that as a youngster, she idolized Serena Williams, became a real student of Williams’ game, and dreamed of playing her on center court. Thus, the genesis of Muguruza’s winning aspiration, which is the first leg of the strategic framework, is fairly obvious: beat Serena Williams on center court.

Now to the heart of strategy: where to play, and how to win. This is the fun stuff!

Interestingly, Muguruza chose to simply play straight down the middle of the court. The reason this is interesting is because with today’s game, most players try to get their opponent on the run, create space, and use geometry to hit winners into open territory.

But…Serena Williams is a master of defending against that strategy, there’s no one better, and rarely does she fail to make her opponent pay the bitter price of demoralizing loss when they try to run her around.

Muguruza chose her spot well: right at the feet of the master. That did three things: First, it made Serena move her feet in an uncomfortable way to get away from the ball, decide quickly whether to hit forehand or backhand, and then create some room to hit that stroke. Second, it made Serena generate her own angles, which is hardest to do from the center of the court. Third, it created a bit of incredulity. You could almost see Williams thinking, “who does this kid think she is, coming right at me? Doesn’t she know who I am?”

Hitting down the middle right at Serena is all well and good, but you can’t just float the ball over the net. Muguruza’s “how” was singular: hit the ball hard, flat, and deep. That kept the ball low, took away Serena’s time, and made her immediately defensive, vulnerable, and weak, because she had to back up to hit the ball. Muguruza’s ground strokes matched Serena’s in power and speed, again surprising Williams, because she could not intimidate Muguruza, and could not “hit through” her (meaning, overpower her, as Serena does so easily, so often, with other opponents).

In Muguruza’s own words, the winning capability was unique: forget that she was playing Serena Williams. “It was really difficult to be able to, O.K., be calm and say, ‘It’s another player,’ ” Muguruza said. “But I think I did it, and that was the reason I could play like this.”

That’s pure mental capability, which at the elite level of sport is almost always a deciding factor.

It’s hard to know what exactly what kind of training regimen and study and preparation Muguruza chose to employ, but her systematic and nearly lifelong study of her opponent is a clue, as is her ability to consistently hit hard, flat and deep down the middle.

What Must Be True?

I doubt Muguruza was thinking this, but perhaps her coach was: the leap of faith assumption in the chosen strategy must have been something along the lines of, “Serena will not adapt to this style of play, and will wait it out.” Her key “what must be true?” was focused on the competitive reaction, not surprisingly.

It was easy enough to test. And Muguruza did so from the first point.

Had Serena given credence to Muguruza’s intent, she might have used her vast experience and skill to respond quickly in different ways, thereby forcing Muguruza to rethink her strategy. But as so often happens to the Goliath in any domain, she stubbornly hung on to her previously winning ways, to her detriment.

This is how disruption actually happens. There are two parties to any disruption. Yes, there’s a disruptor. But the target of disruption is equally involved. Any leading entity failing to take a a clear and present threat seriously (no matter how small it appears at first glance), failing to react swiftly and decisively, and failing to use generally abundant resources to deliver game-ending strike-backs, deserves to be disrupted.

Harsh, but it is what it is.

So, Serena got what she deserved. And like a pro, she owned up to it: “Honestly, I think Garbine played really well, and she played really smart. I didn’t adapt.”

The Strategy Sprint: A DIY Guide

How Will You Win (Strategically Speaking)?