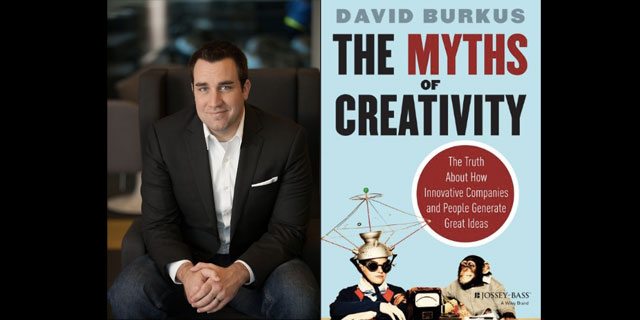 The Myths of Creativity

What causes us to be creative one day and completely blocked the next? Where do our sudden creative insights—our Eureka! moments—come from, and how can we generate more of them, more consistently? What brand of creativity is best suited to business?

Much has been written about creativity in business in an effort to answer these kinds of questions, and much of it is just plain fiction, according to David Burkus, founder of the popular LDRLB blog and author of the new book, The Myths of Creativity: The Truth About How Innovative Companies and People Generate Great Ideas.

Based on the latest research into how creative individuals and firms succeed, Burkus sets the record straight in his new book on 10 very popular but mistaken beliefs, such as:

I recently caught up with David to ask him a few questions about these and other creativity myths.

There seems to be no shortage of ideas in the business world. Why talk about creativity in the first place?

Many people associate creativity with the ability to just generate lots of ideas, rather than focusing on ideas that are novel or useful. There are certainly a lot of ideas floating around, but finding the ones that will actually have a useful impact on the world takes a process of idea generation, refinement, testing and modifying until we come upon a worthwhile idea. I think we need a broader discussion about what creativity is and is not. It’s not thinking up lots of ideas; it’s creating ideas that are new and useful.

Linus Pauling is attributed with saying, “The best way to get a good idea is to have lots of ideas.” Would you care to weigh in on that?

Pauling is totally right, but sometimes we oversimplify his intent. The best way to get good ideas is to start with lots of them, but that doesn’t mean we’ll be able to look at our list of ideas and pluck out one perfectly formed innovation like a diamond in the rough. Diamonds are actually a good metaphor for ideas since it takes intense pressure and a long process to make a diamond. So it is with ideas. We start with a lot of good ideas, but we have to take those ideas through a process to arrive at a truly good one.

Is the old cliche “there are no new ideas under the sun” true or false?

Generally true. I don’t look at this phrase as saying, “There’s nothing new, so stop trying.” Rather, I think it’s a statement on the nature of ideas. All new ideas are built from combinations of older ideas. The printing press was a combination of moveable type and the wine press. Henry Ford didn’t invent the automobile or the assembly line, but when he combined the two, something innovative happened.

My favorite example is Star Wars. George Lucas combined a famous plot line from mythology with low-budget sci-fi films and Akira Kurosawa samurai films, and the result was a trilogy that continues to resonate with us. Creative genius doesn’t come from thinking up totally new things; it comes from merging the ideas we already have and creating a combination we haven’t seen before.

Why do we love our own ideas but naturally reject those of others?

We think we would recognize a genius idea the moment it was presented, but the truth is, we have a natural, psychological bias against new creative ideas. For an idea to be creative, it has to be novel and useful, and we use past precedent and the status quo to judge whether something is useful, meaning if that something is new, then we’ve already stacked the deck against it. When we think of the idea ourselves, I think we have an easier time working around this bias. When someone else presents the idea, we go right into judgment mode, and the bias takes over.

Which of the 10 creativity myths do you think cripples small businesses the most?

The above bias [against new ideas] turns into a complete myth. I call it the Mousetrap Myth, from the phrase, “If you build a better mousetrap, the world will beat a path to your door.” History is filled with great ideas that were rejected by the public or by businesses. For instance, Kodak had the opportunity to develop the digital camera but didn’t.

In small business, this can be even more crippling since the stakes for implementing great ideas are even bigger. Small businesses might think they need more great ideas, and they try to teach their people to generate more ideas, or they hire consultants to help bring in new ideas. The truth is that innovation and competitive advantage aren’t an idea generation problem; they’re an idea recognition problem. We need to get better at implementing the ideas we already have.

If you could point to one historical figure who embodies most of the truths about creativity, who would that be?

I would say Thomas Edison as he really was, not as the vague resemblance of him we currently have. We think Thomas Edison invented the light bulb, and we envision him alone in his studio slaving away at it. The truth is, Edison didn’t invent the light bulb so much as he refined it and made it commercially viable. He found other ideas to combine with the existing technology of the light bulb and created a version that would succeed on the market.

In addition, he rarely worked alone. During the peak of his inventing career, Edison built a large studio in Menlo Park where roughly 15 other inventors worked alongside him, trading ideas and collaborating on projects. I like to think that his greatest invention wasn’t the light bulb; it was Menlo Park.

What’s the one thing you want readers to take away from The Myths of Creativity?

We’ve built up a system of beliefs around creativity that portray it as something vague, mysterious and inaccessible. The truth is, creativity is something that’s hard wired into our brains. Sure, some people are better at it than others, but that doesn’t mean you can’t grow your creative genius. We all have the potential to create great ideas or breakthrough innovations—it’s just a matter of learning and being comfortable with the process. That’s the truth about innovation.

This article was originally published on my OPEN Forum column.