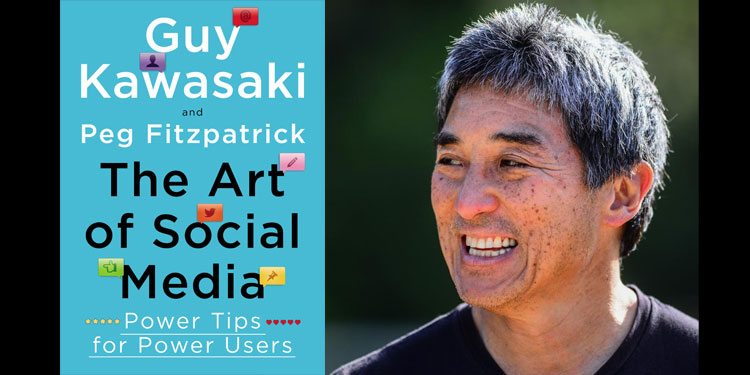 Guy Kawasaki needs no introduction. He’s the original Apple evangelist, turned ultimate evangelist. From the art of startup to artisanal self-publishing, Guy takes his current endeavor to a level of artistry.

Ten years ago, anything resembling what we now know as social media was a blip on the typical web surfer’s radar screen. Now everyone is a social media user. But not a “power user.”

And that’s where Guy comes in. He is. A power user, that is. I’ve watched his follower base grow 10X in the course of less than two years. He has millions of fans and followers across the full spectrum of social media.

So it should come as no surprise that he’s penned (yet another) bestseller on the topic, this time with coauthor Peg Fitzpatrick: The Art of Social Media: Power Tips for Power Users.

It’s the kind of book you want on your mobile device for handing reference at all times. It’s a fast read, chock full of practical, immediately useful techniques

I had the chance to throw a few fun questions Guy’s way. (Here’s a tip to all you authors and interviewees out there: pay attention to how Guy answers a question. Soundbites, people, not sermons! There’s no editing here!!)

You stunned me when a few pages in you openly admitted to not knowing how social media works.

If you tell people what you don’t know, they’ll believe you when you tell them what you do know. This isn’t a simple matter of ignorance. Social media changes so fast that depending on what side of the bed Mark Zuckerberg and Dick Costolo get up in the morning, you may have to change what you do.

Why does being a power user of social media matter?

Being a power user of social media doesn’t necessarily matter if all you want to do is keep in touch with friends and relatives to show them when you’re drunk, pregnant, or at the beach. But if you want to use social media as a marketing platform to achieve professional goals, then it’s essential. For this use case, social media is the best thing that ever happened because it’s fast, free, and ubiquitous.

What distinguishes a power user from a normal user?

What’s the number one thing people do wrong in social media?

It’s hard to isolate one thing. The most common mistakes are not adding a graphic or video to every post, not repeating posts, and not sharing content that is worth re-sharing.

Why is asymmetry important?

You mean visual asymmetry in avatars, right? It’s important because it makes an avatar more visually interesting. People make snap judgments based on avatars: worth paying attention to or not. Social media is like Tinder, not eHarmony.

Can I ignore all these tips and still be a heavyweight social media influencer?

Sure, if you’re POTUS, Kim Kardashian, Paris Hilton, or Michael Strahan. Also, if you or your agency buys likes, circlers, and fans, you can fake being a heavyweight. But for the rest of us, you have to earn your stripes, and this book shows you how to do that.

Let’s say I implement all of your power tips. Will it bring me a 10x increase in followers, friends, likes, etc?

This is hard to say. It would take six to twelve months, and you’d have to work one-two hours every day. You’d have to constantly find, optimize, and post valuable content. It can be done, but it takes a lot of work.

What’s in your book that I can’t discover for myself simply by using social media?

Nothing, but it would take you years and a very curious mind. You could say this about any book other than those by Stephen Hawking, maybe.

Agree or disagree (and why): Social media for most people is about being famous without being really good at anything.

What’s one secret tip people can only get by reading your book?

Care to weigh in on LinkedIn’s move to become more of a publishing platform?

LinkedIn’s move is awesome because it’s the publishing platform that unless you’re a total idiot, you need to put your best foot forward because what you do affects your livelihood.

This book is focused on the individual. Is your advice essentially the same for the corporate user side of social media?

My advice is essentially the same for the corporate user except that the avatar should be your logo, not your face. Duh. That said, corporate users with digital agencies are the least likely to embrace the recommendations of the book. This is because agencies are incentivized to buy their way into social media.

What’s the future of social media look like five years from now?

This is one of the main things that I freely admit to not knowing. Five or so years ago, people thought that MySpace would be the operating system of the Internet and companies like Amazon would be renting space in MySpace’s world. I rest my case.

What’s the one thing you want readers to take away from The Art of Social Media?

This is a trick question. If there was only one thing, I would write a blog post to explain it—maybe even a tweet. The Art of Social Media is the best book ever written about social media. I want readers to take away dozens of things from reading it.

And that is how you answer interview questions in the age of social media.

You can pick up The Art of Social Media on Amazon Kindle for $11.

« 2015: The Year of the Question
How Strategy Transforms »