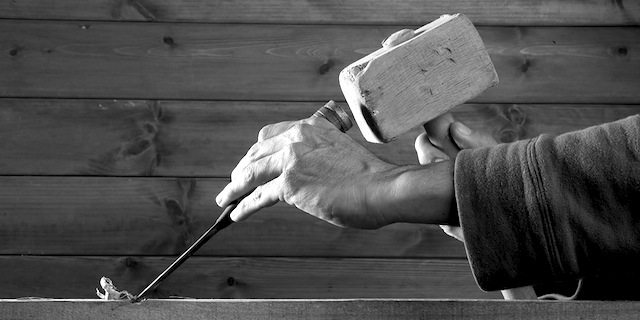 Further thoughts on artistry at work…

Each of us, in our own way, is an artist. Stirring within each of us is an innate desire to employ our natural creative spirit through what we do every day to put food on the table. Artistry is not reserved for the “arts,” nor is it the exclusive domain of “The Artist.” Rather, it is an abundant quality open to every human activity meant to produce something of substance and value.

Evidence of artistry at work is all around us, there in the things we don’t normally think of as art: strategies we concoct, teams we supervise, projects we manage, deals we cut, reports we prepare, and software we program. From the clean edge of the mason’s mortar to the impossible marriage of microscopic nerve endings at the hands of the skilled neurosurgeon; from the immaculate order of the sharp-eyed chambermaid to the technical wizardry of the systems engineer; from the cheerful wave of the monthly gas meter-reader to the stirring eloquence of the visionary leader; from a Starbucks coffee to an Apple product to a Ferrari automobile – if we can think it, build it or do it, the potential for personal and professional creative excellence is alive.

Achieving it in and through our work is another matter; it is indeed the art of work, and a lifelong exercise of constant challenge and discovery.

Artistry as a universal ideal has held its laurels through the ages as a noble aim and life-creating force. We know it when we see it, and we admire it for what it represents – the very essence of human creative excellence. We know when it’s absent and we shake our heads in sorrow – for we understand that the hand, heart and head have not labored together. To bestow one with the esteem of “true artist” is to pay the ultimate compliment and distinguish the individual from all others in their class. Yet, we have treated artistry as a second-class citizen in the main of our daily labor experience for several hundred years.

In the days of the Renaissance, a rather magical European cultural rebirth experiencing the greatest growth in arts and sciences in the history of human endeavor, skilled labor was viewed as an artform, a craft to be mastered. A young apprentice would toil for years under the tutelage of a master before becoming a journeyman, the equivalent of today’s freelancer. Only the acceptance of a masterwork, a demonstration of creative accomplishment – a magnum opus – submitted to a governing guild would enable the journeyman to attain the distinguished name of master.

The advent of the Industrial Age and machine-based work saw the beginning of the end to the pathway to mastery. The birth and proliferation of the modern corporation brought with it the proverbial vertical ladder to the top, instead of the horizontal development path to expertise.

Work was, quite simply, dehumanized.

Not until the Information Age of late did the tides begin to shift back to the idea of more human-centered approaches to work. Unfortunately, a clear crisis of meaning had in the meantime permeated the workforce – a return to a former and more primal mindset of survival, born and bred by a world at war and a roller coaster economy. The pursuit of mastery gave ground to hard-edged professionalism, a distant relative but a socially acceptable substitute.

Artistry at work and the goal of creative excellence was largely abandoned in favor of pursuing the successful career. While the two are not necessarily at odds with each other, we still remain largely a career-minded workforce: Getting ahead more often than not overpowers getting better; being comfortable dominates being different.

The unfortunate impact of this has been that many (most, according to the Gallup folks) people feel a void when it comes their work. Most would rather be doing something else with their life, and as a result spend most of their day distracted, withholding their very best from their tasks. A staggering amount of human potential is being left on the table, and any thought of creative excellence goes right along with it.

To be fair, most of us have some interest in our work, and we’re undoubtedly good at what we do. But something, some intangible connection, is missing on a very personal level.

There is, however, a light on the horizon. At least I want to believe that.

The Trouble With Talent (an Artistry@Work installment)