They’re all right. What’s important are the common elements: speed, brevity, iteration, and, of course, winning.

But can the notion of a sprint have application in the world of business strategy? It’s a question I’ve been exploring in my practice. The short answer: yes.

Strategy sprints are close cousins to something I became experienced during my tenure with Toyota, called jishuken, which loosely translates into something like, “independent study group.” Basically, small teams of senior managers come to together to collaboratively tackle an important or pressing theme in a compressed timeframe, with the outcome being a clear direction or solution. It’s intense work.

One of my favorite projects as a jishuken leader was working with the Los Angeles Police Department bomb squad under the auspices of the University of Toyota. Over the course of three days, a team comprised of bomb technicians, canine handlers, and assorted field officers completely redesigned the process for handling bomb scares to account for the new breed of explosives — IEDs (improvised explosive devices) — making their way into mainstream society. Within a few months it became the new standard.

Over the past few months I’ve been working with a number of clients to hone a strategy sprint process that combines jishuken intensity with the common elements of any sprint and completely replaces often long, laborious and left-brained traditional approach to strategy (strategic plans, SWOT analysis, et al).

I’ve tried everything from a half day to five days, and settled on what I find to be the optimal window, and one that is palatable for senior managers serious about crafting a winning strategy: three days, book-ended with some before and after work.

Before the sprint: Plan and Prepare

Achieve clarity on the current strategy. Define the most pressing challenge with it. Reframe the issue as a choice between mutually exclusive options. Rapidly generate a multitude of possibilities, selecting a handful to work with over the next two days.

Define what winning means, along with the happy story that comes from a win. Explore attractive segments and competitive advantages, and settle on the heart and soul of strategy: answers to the key questions of “Where will we play?” and “How will we win?” using the visual aid of the Play-to-Win Canvas. 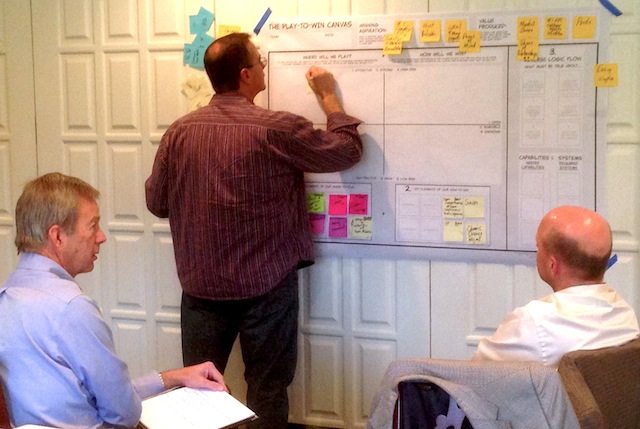 If Day 2 was “heart and soul,” day 3 is “hands and head.” Revisit the heart of strategy, then define the capabilities needed to produce a win, the kinds of management systems required to generate and sustain those capabilities. Then reverse engineer the logic of the entire strategy, using strategy’s magic question–what must be true?–and construct a quick experiment that can be used to rapidly test the veracity of the riskiest answer. Again, using the visual aid of the Play-to-Win Canvas.

After the sprint: Digest and Debrief

Armed with a handful of new strategies to test against a set of robust hypotheses, give everything some breathing room, a day or two to settle into the collective conscience of the group. Transpose the output of the three days into a series of one-page strategy briefs, one per strategy. You are now ready to test!

Over the next several posts, I’ll be sharing a DIY guide for running your own strategy sprint.