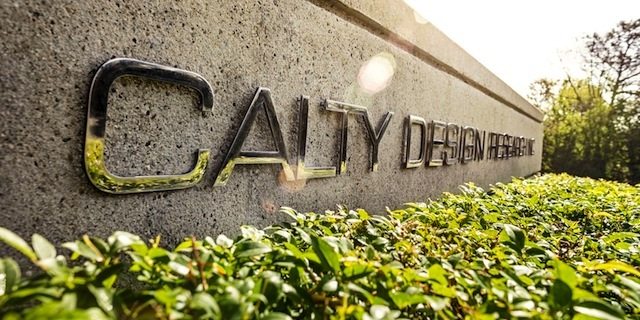 Toyota recently completely redesigned Toyota.com and launched an iPad app. Both are terrific.* Both allow you to explore the company, its many faces, and go behind the scenes (in addition to shopping for cars). One of my favorite aspects of both the site and the app is the coverage of Toyota’s design process. On the app it’s called “Behind the Design.” On the site it’s a closer look at Toyota’s CALTY Design Research, Inc., located in Newport Beach, California, and headed by Kevin Hunter. (CALTY is  the compressed combo of “California” and “Toyota”). CALTY is involved in nearly all of Toyota’s major vehicle design programs.

Back when I was teaching an experimental course in creativity and innovation in organizations at Pepperdine’s b-school, I had Kevin spend a few hours with my class, explaining the CALTY design process. I had gotten to know Kevin, and he supplied a great deal of inside information for my book The Elegant Solution.

1. Empathy. CALTY calls this “Concept Making.” Kevin will tell you that at CALTY there’s a sense of urgency to make design count, to resonate with the buyer. He believes you can never stand still. The customer is always moving, changing, and if you’re not out there all the time trying to understand the functional and emotional needs of consumers, your design will simply fall flat. So, in keeping with the general philosophy of design thinking, everything begins with the customer, and genchi genbutsu (go look, go see) is the key activity that begins the design process. “The Design team is fully briefed on the development goal and target customer,” states the iPad article. “As the designers research their market, they take into account the latest trends and themes.”

2. Ideation. Once the insights into the human factors are clear, ideation begins. (That’s Kevin at the whiteboard.) Through extensive discussion and research, they collaborate until satisfied that they have reached a shared vehicle image for the concept, which is then translated by hand into idea sketches.

Freehand sketches are translated into computer renderings which allow the designer to examine, explore, and experiment with different designs quickly. The digital sketch goes from two dimensions to three.

Kevin’s rule for design concepts is this: Make it for now.

“People can’t tell you what they want in the future,” says Kevin. “But they know what they want now. You have to balance creativity with market acceptability. You have to push the envelope and be progressive, but you can’t get too far out there, because customers won’t understand. Your design has to evoke something familiar or emotional while at the same time offering something new and unfamiliar. You have to avoid a strict design bias and remember who you’re designing for. You can’t be selfish, you must focus outward, and on the problem you’re trying to solve for customers.”

I drive a Toyota FJ Cruiser (Toyota Racing Development Special Edition, circa 2008), and I recently ran across the early sketches as I was roaming the halls of Toyota. 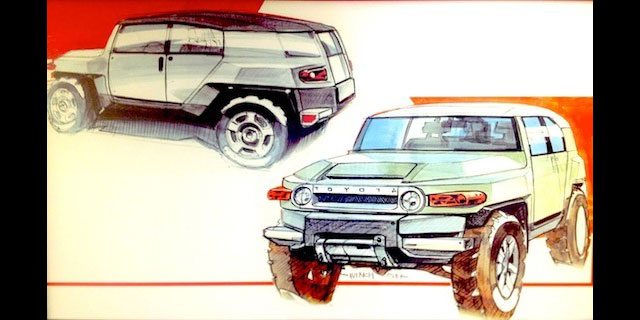 3. Color. Back in the early 1990s, now president Akio Toyoda dared to pose the question of why so many Toyotas in Japan were white. Akio was deemed a bit of a maverick back then, as one of the few managers wanting to explore the internet. His insight was prescient, as color is of enormous importance to consumers, lending individuality to image. Thus color coordination is critical in the early stages of pre-mockup.

4. Mockup. Everything involved in the car is mocked up long before production prototyping begins. The exterior of the car is created using clay models, from small scale to full.

“The clay modeler works with the designers to ensure that the original vision is retained,” states the app. “The work involves molding and chiseling–again and again–to ensure the shape of the vehicle is properly refined.” The modelers invoke a bit of Michelangelo here, removing anything that isn’t true to the vision.

Once Kevin is happy with the small scale clay model, the full scale model is molded and sculpted.

For the interior mockup, everything from wood (for wheels) to plastic, metal and fabric is used to create the look and feel of the cabin. According to the app, “Toyota’s wood modelers are some of the most skilled craftsmen in the world, having won first prize in the World Skills Competition.”

5. Idea Testing. CALTY calls this customer feedback “Decision Hall.” As with every good design process, things begin and end with the user. CALTY uses two different light-controlled settings (daylight or “roof open” and inside or “roof closed”) to allow future customers to examine every aspect of the car, “allowing viewers an opportunity to experience the designer’s vision and offer any feedback that may impact the final design.

To create a design that works, CALTY believes each step must be executed with care and thoroughness by a true team of world-class team of designers committed to seeing the process through from a single nugget of consumer insight to a fully realized, original design. The creative contribution of each team member is taken very seriously.

“Creative contribution is part of every performance review and looked at closely from an evaluation perspective,” Kevin told me. “We work as team, but it’s always overlaid with intense competition for the winning ideas. For every design, we have a number of smaller teams in the hunt. To make creativity flow and give people the freedom to think, we’ve removed much of the layering that other organizations have. Hierarchy stifles innovation, and we need open and honest disagreement about every idea. Every idea counts!”

There are many ways to explore Toyota behind the scenes, through the Toyota.com site and iPad app–whether you’re a fan of technology, a fan of racing, or just a fan of great companies that want to make the world a better place!

*(Disclosure: While I work with Toyota’s marketing group, I was not involved in these projects.)