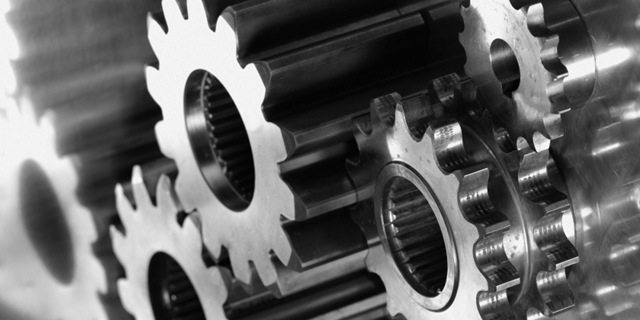 In my last “strategically speaking” post, I covered the fourth of the series of five cascading questions in Roger Martin’s Playing to Win strategic framework. I used the example of Stanislas Wawrinka’s domination of Rafa Nadal in the 2014 Australian Open. Many email comments arrived in my inbox (strangely, though, no public comments), more than a few of which dismissed Wawrinka’s win as nothing more than luck.

Well, fine. But the issue is: how do you make your own luck? One answer: create and use a system that gives rise to, and supports, your chosen capabilities that will lend you competitive advantage and enable you to win in the space you’ve chosen to play.

And to further support the notion that Wawrinka focused on clear patterns of his opponent’s play to to help craft his strategic system of preferred patterns that keyed on his best capability (blazing one-handed backhand), take a look at this data visual: 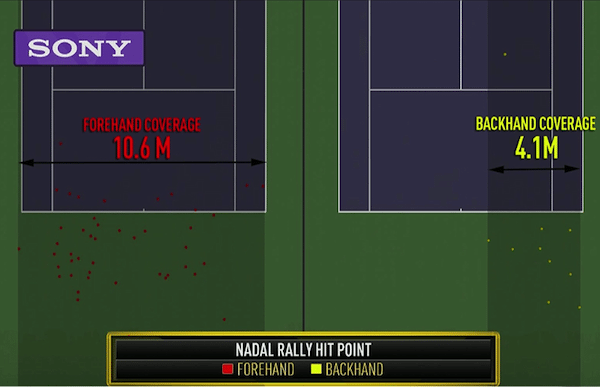 The way Wawrinka’s coach, Magnus Norman, read this (in my opinion) is that Rafa Nadal’s tendency is to do just about anything he can to hit his ballistic left-handed forehand. Nadal covers the entire court with his forehand, not just the left half of the court. He even hits forehands from the doubles lane on the right side of the court!

So…Wawrinka used that against him, plain and simple. If he hit a shot to the center of the right side of the court, he knew Nadal would more than likely hit a forehand, putting him out of position to respond in anything but a defensive way to a Wawrinka one-hand backhand shot hit short, wide, and fast to Nadal’s left. If the ball came back, it was a routine put-away. Game over.

It’s been almost a year since Ferguson retired, but watching Manchester United go down to Manchester City 0-2 this past Saturday in the English Premier League brought him to mind. Without Ferguson, Manchester United is now back to exactly where it was in November 1986, when Ferguson was named manager: second to last.

Manchester United is one of the most successful and valuable franchises in sport. During his 26 year tenure, the club won 13 English league titles and 25 other domestic and international trophies. Ferguson’s overall title record is almost double that of the next-most-successful English club manager. And as Elberse points out, “Ferguson was far more than a coach. He played a central role in the United organization, managing not just the first team but the entire club.”

And Ferguson had a system, which revolved around a unique, or certainly unconventional, approach to talent development. “Upon his arrival at Manchester,” writes Elberse, “Ferguson set about creating a structure for the long term by modernizing United’s youth program. He established two “centers of excellence” for promising players as young as nine and recruited a number of scouts, urging them to bring him the top young talent. The best-known of his early signings was David Beckham.”

From the moment I got to Manchester United, I thought of only one thing: building a football club. I wanted to build right from the bottom. That was in order to create fluency and a continuity of supply to the first team. With this approach, the players all grow up together, producing a bond that, in turn, creates a spirit.

When I arrived, only one player on the first team was under 24. Can you imagine that, for a club like Manchester United? The first thought of 99% of newly appointed managers is to make sure they win—to survive. So they bring experienced players in. That’s simply because we’re in a results-driven industry.

Winning a game is only a short-term gain—you can lose the next game. Building a club brings stability and consistency. You don’t ever want to take your eyes off the first team, but our youth development efforts ended up leading to our many successes in the 1990s and early 2000s. The young players really became the spirit of the club.

Ferguson believed in constant refreshing of that talent, even in the midst of a winning season. Conventional wisdom in sport is “if it’s working, don’t mess with it.” Too, there’s a lot of superstition in sport when it comes to a winning combination. Ferguson went the other way.

According to Elberse, “His decisions were driven by a keen sense of where his team stood in the cycle of rebuilding and by a similarly keen sense of players’ life cycles—how much value the players were bringing to the team at any point in time. Managing the talent development process inevitably involved cutting players, including loyal veterans to whom Ferguson had a personal attachment.”

In other words, Ferguson took a portfolio management approach. “He is strategic, rational, and systematic,” writes Elberse. “In the past decade, during which Manchester United won the English league five times, the club spent less on incoming transfers than its rivals Chelsea, Manchester City, and Liverpool did. One reason was a continued commitment to young players: Those under 25 constituted a far higher share of United’s incoming transfers than of its competitors’. And because United was willing to sell players who still had good years ahead of them, it made more money from outgoing transfers than most of its rivals did—so the betting on promising talent could continue.”

We identified three levels of players: those 30 and older, those roughly 23 to 30, and the younger ones coming in. The idea was that the younger players were developing and would meet the standards that the older ones had set. The goal was to evolve gradually, moving older players out and younger players in.

It was mainly about two things: First, who did we have coming through and where did we see them in three years’ time, and second, were there signs that existing players were getting older? The hardest thing is to let go of a player who has been a great guy—but all the evidence is on the field. If you see the change, the deterioration, you have to ask yourself what things are going to be like two years ahead.

Another element of Ferguson’s systematic approach is revealed in his approach to practice sessions.

Elberse says that “Ferguson’s teams had a knack for pulling out victories in the late stages of games. Our analysis of game results shows that over 10 recent seasons, United had a better record when tied at halftime and when tied with 15 minutes left to play than any other club in the English league. When their teams are behind late in the game, many managers will direct players to move forward, encouraging them to attack. Ferguson was both unusually aggressive and unusually systematic about his approach. He prepared his team to win. He had players regularly practice how they should play if a goal was needed with 10, five, or three minutes remaining.”

We look at the training sessions as opportunities to learn and improve. Sometimes the players might think, ‘Here we go again,’ but it helps us win.

Winning is in my nature. I’ve set my standards over such a long period of time that there is no other option for me—I have to win. I expected to win every time we went out there. Even if five of the most important players were injured, I expected to win. Other teams get into a huddle before the start of a match, but I did not do that with my team. Once we stepped onto the pitch before a game, I was confident that the players were prepared and ready to play, because everything had been done before they walked out onto the pitch.

I am a gambler—a risk taker—and you can see that in how we played in the late stages of matches. If we were down at halftime, the message was simple: Don’t panic. Just concentrate on getting the task done. If we were still down—say, 1–2—with 15 minutes to go, I was ready to take more risks. I was perfectly happy to lose 1–3 if it meant we’d given ourselves a good chance to draw or to win. So in those last 15 minutes, we’d go for it. We’d put in an extra attacking player and worry less about defense. We knew that if we ended up winning 3–2, it would be a fantastic feeling. And if we lost 1–3, we’d been losing anyway.

To view  a short video of Sir Alex Ferguson talking about this element of his system, click HERE.

You’ve got a winning aspiration, you know where you want to play and how you’ll win using the capabilities needed to pull off the win. But do you have a system that sustains all that?

What Appears To Be Strategy…Isn’t