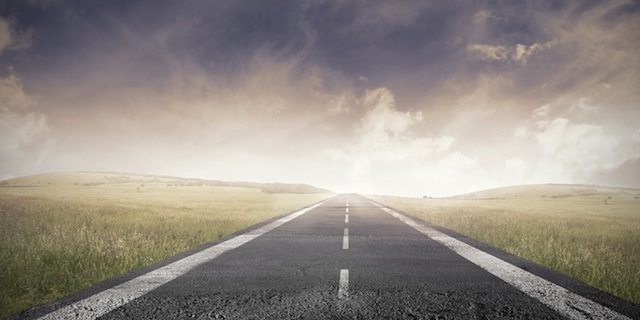 …it helps to have a map.

Introducing the Play-to-Win Canvas, a large wall map meant to help teams explore strategic possibilities. (Click on the image below to download a free full-sized version, sharable under a Creative Commons license.) 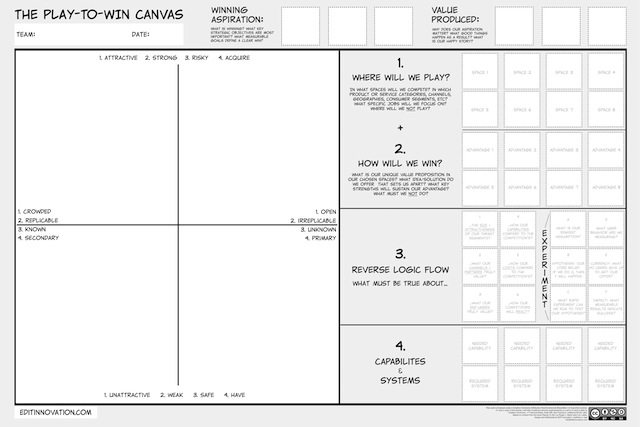 Let’s pick up where we left off. To review, you’ve decided you need to shift strategy. You’ve drafted your current strategy using the Roger Martin five-question cascade. You’ve defined the most worrisome problem, and you’ve reframed it as a choice between at least two mutually exclusive options. You’ve expanded each choice and brainstormed initial where-to-play/how-to-win combinations. You’ve clustered them by theme. You’ve culled them so that you’re down to three or four thematic possibilities.

Now it’s time to generate a strategic cascade for each of those possibilities. And this is where the canvas helps. By watching and working with teams over the past two years, and picking Roger Martin’s brain, it became very clear to me why producing a new winning strategy is difficult: people like to lock and load on a given direction far too early in the process.

In other words, there’s a great temptation to take an initial strategic possibility and develop a full strategy around it. Wrong move. You need to basically start over, with that possibility as simply the point of departure.

So, for example, and to continue with our hypothetical company STAR FITNESS TRAINING (see last post), they have three initial where-to-play/how-to-win possibilities they believe are worth exploring: 1. expand to all of Southern California through franchising, 2. expand into less affluent client segment by hiring, training, and certifying new training associates, and 3. offering exercise DVD products.

So far so good, but the whole reason I developed the Play-to-Win Canvas is because I see how tempting it is to cherry-pick one of the three, get the heads in the room nodding in agreement, and go from there. If you do that, all you’ve really done is to shortchange the art of possibility by two-thirds! (Actually, more, if you include the current strategy as a possibility).

For each of the three new possibilities, you want to start from the top: What’s our winning aspiration? Where will we play? How will we win? What capabilities are required? What management systems must we have?

I have found it very difficult for a strategic team to create robust cascades for more than one possibility, so I like to split the larger group up into smaller exploratory units, each devoting their entire attention to one possibility. (In an upcoming post, I’ll outline the agenda for a multi-day “strategy sprint.”)

The canvas helps by focusing the conversation, guiding the thinking, and offering ways to prioritize options and possibilities. The easiest way for me to show you exactly how to use it is for you to watch this webinar I did for Gemba Academy on my YouTube channel.

ACKNOWLEDGEMENTS: Big shout out to Gemba Academy, thank you Kevin Meyer and Ron Pereira! And a huge thank you to Roger Martin for his input…this is the fifth iteration of the canvas, and probably not the last. And to Roger’s associate Jennifer Riel for her facilitation guidance and examples. Sources: Playing to Win, by Roger Martin and A.G. Lafley, HBR facilitation guide by Jennifer Riel.

Strategy vs. Execution: A Meaningless Distinction